LIB reported that the United Arab Emirates government suspended Direct Employment Visa for Nigerians as a result of the increasing rate of crimes involving Nigerians in the Middle-East country.

Reacting to this via an Instastory post, Gifty stated that it is a shame to be called a Nigerian. Describing Nigeria as a lawless country, she also expressed fear of other countries subjecting Nigerians to same treatment. 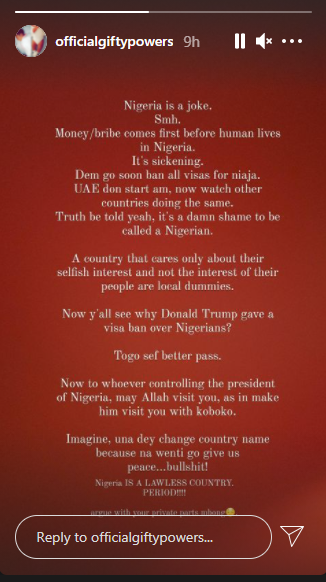 Tue Jul 27 , 2021
Many killed as bandits attack Zamfara village Jaya settlements in Boko district of Zurmi Local Government Area of Zamfara State was on Monday July 26, attacked by bandits.   Eyewitnesses told Daily Trust that the armed men invaded the village on over 100 motorbikes and killed many people.   A resident, […]