If there are no changes on this FSARS issue within one week, we will get back out there stronger- Naira Maley tweets as Falz and Runtown lead protest

Naira Marley says he and his fans will take to the streets if there are no changes within the FSARS as promised by the police within the next one week.

He tweeted this just as his colleagues, Falz and Runtown are currently leading some Nigerians on a peaceful #EndSARS protest in Lagos.

Naira Marley had planned to lead a peaceful protest on Tuesday October 6, but called it off after the police appealed to him not to. Read here.

”Some of y’all will remain follower and never become a leader.

Be a leader, not a follower. Never let anyone tell you what you can and cannot do.

It’s easy to stand with the crowd .It takes courage to stand alone.

Respect to all the youths out there fighting for their rights and what’s right. God bless y’all. After a week if there’s no changes on this fsars issue as promised by nigeriapoliceforce then we will get back out there stronger. Stay safe and protest peacefully if u re protesting.

they know My own crowd ya werey gan o #uncontrollably I told y’all already 99% Marlians are not on twitter. #EndSARSBrutality” 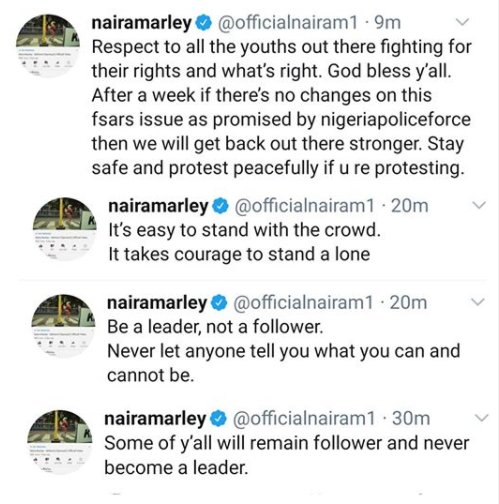 NEWS: Dad with 19 children names latest newborn 'Enough' as he fears they could starve to death

Thu Oct 8 , 2020
Dad with 19 children names latest newborn ‘Enough’ as he fears they could starve to death A dad with two wives and 19 children has named his latest baby Yeter – which means “enough”.   Zeher Gezer, who lives in the city of Diyarbakir in the south-eastern Turkish province, fathered […]